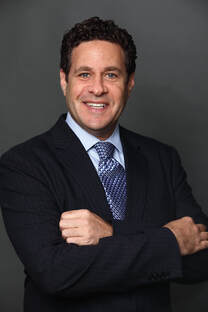 Rabbi Richard S. Chizever, Esq. is a native of Los Angeles and graduated from U.C.L.A. in 1991 with a BA in economics.  After graduation, Rabbi Chizever worked in the entertainment industry where he was a manager of actors and directors.  During his three years in that career, he came to the realization that he wanted to learn more about Judaism.  In the summer of 1994, he left the entertainment industry and decided to enter the Conservative rabbinate.  Rabbi Chizever spent the first two years of his rabbinic education at the University of Judaism in Los Angeles.  After earning his Master’s Degree in Jewish Letters, Rabbi Chizever continued his studies at the Seminary’s Bet Midrash (the Schechter Institute) in Jerusalem, graduating in May 2000 from The Jewish Theological Seminary’s New York Campus with a concentration in Prayer and Bible.  Rabbi Chizever was a rabbinic intern at Congregation Habonim, located on the Upper-West side of Manhattan.  He also chaired the Rabbinical School’s Student Placement Committee, where he was responsible for placing rabbinical students into pulpits and related Jewish communal jobs.  Rabbi Chizever was a New York City Auxiliary Police Officer, with the duties of patrolling the Upper-West Side of Manhattan, recruiting, and teaching the first-aid class to his fellow officers.  He served as the Jewish Chaplain for the Cobb County Police Department.  Upon rabbinical school graduation in May 2000, Rabbi Chizever served as the Assistant Rabbi at Congregation Etz Chaim in Marietta, Georgia.  In June 2002, he assumed the position of Associate Rabbi at the Aventura Turnberry Jewish Center, where he was involved in all facets of the congregation and Jewish communal life. While at A.T.J.C., Rabbi Chizever served on the Board of Directors for the Miami Chapter of The American Jewish Committee, as well as founded the very popular “InStyle Shabbat” for Jewish singles in their 20’s and 30’s.  In June 2004, Rabbi Richard S. Chizever became the spiritual leader of Temple Israel in Longwood, Florida.  While in Central Florida, Rabbi Chizever got quite involved in the Jewish Community.  He was an active member of G.O.B.O.R. (Greater Orlando Board of Rabbis), was President and Co-Founder of the Interfaith Council of Central Florida, and served in the capacity of adjunct professor in the Religion and Philosophy Department at Rollins College.  Rabbi Chizever created a “ruach” filled musical Kabbalat Shabbat Service called Friday Night Fever, and released a CD of its music. Rabbi Chizever  expanded his rabbinate by pursuing a law degree at Florida International University.  While in law school, Rabbi Chizever served as spiritual leader of Cuban Hebrew Congregation-Beth Shmuel in Miami, Florida, made Dean’s list every semester, was an F.I.U. College of Law Florida Bar Foundation Fellow, interned at Legal Aid Society of the Miami-Dade County Bar Association, and received a Florida Association for Women Lawyer’s scholarship.  Rabbi Chizever earned is Juris Doctor in 2011, and graduated cum laude.   After law school graduation, Rabbi Chizever worked as an associate attorney at one of the top litigation firms in Miami - Hall, Lamb and Hall.   In 2013, Rabbi Chizever opened up his own law firm, Richard S. Chizever, P.A. where he uses his rabbinic, counseling, and legal skills in the area of Family and Divorce Law and Domestic Violence actions.  Rabbi Chizever is a member of the Miami-Dade County Board of Rabbis and Rabbinical Assembly of America.  Rabbi Richard Chizever is the President of the North Dade Bar Association, serves on the Board of Directors of the Broward County Bar Association, holds a board position on the prestigious First Family Law American Inns of Court, is a member of the Florida Bar Family Law Section and Miami-Dade County Bar Association.  Rabbi Chizever has a beautiful daughter, Sophia.  In his spare time, Rabbi Chizever loves to attend sporting events and concerts, take R.V. adventures, smoke brisket and beef ribs, boat, and ride his Harley Davidson.