RABBI Marc Philippe received smicha from Yeshiva Toras Israel in Jerusalem, also known as Diaspora Yeshiva. He has been a citizen of the world since childhood, having grown up on four continents.

Rabbi Marc Philippe, his wife Valerie, and their three sons Ylan, Noam and Itai reside in Miami Beach where he is delighted to lead Temple Emanu-El and to serve the Jewish community.

Beyond his role at Temple Emanu-El, Rabbi Philippe is a cantor, musician, composer, and conductor. He earned his Masters degree at the prestigious Ecole Normale de Musique in Paris, and later received a second degree at the Conservatoire Maurice Ravel. Simultaneously, he studied at the Institutions Talmudiques Yeshiva Yad Mordechai. Rabbi Philippe honed his cantorial skills as a conductor at the Consistoire Israelite de Paris. He then served the Choeur et Orchestre Philharmonique Européen, Orchestre Paris Pops and the Orchestre de I’lle de la Cite in various professional capacities.

Rabbi Philippe’s history in America is no less distinguished. While working at B’nai Torah as Music Education Director he became the founder of the Jewish Symphony in Boca Raton. He then served as Cantor and Education Director for Beth El Congregation in Phoenix and later for Congregation B’nai Zion in El Paso. His sojourn in the Southwest resulted in his creating The Judaic Cultural Orchestra, which performed fundraising concerts for ARMDI and Hadassah.  He was also a Chaplain for the Arizona Department of Corrections in Phoenix  and the Detention Bureau for El Paso, TX, where he offered counseling, taught classes and led religious services.

He is a member of both the Chevra Kadisha of Miami and the Board of Mishkan Miami, the Jewish Chaplaincy Program of the Greater Miami Jewish Federation. A practitioner of Jewish meditation, he has studied, practiced, taught classes, and organized retreats. He is the founder of the Kodesh House, a Jewish Spiritual Center in Miami,  where sessions, classes, retreats and Seminars are offered in Kabbalistic Spirituality, Jewish meditation and alternative healing.  Rabbi Marc Philippe is also a certified hypnotist and is particularly interested in past-life regressions.

Rabbi Marc Philippe is a fan of Reb Nachman of Breslav, of Chassidic philosophy in general, and of Kabbalah. His work as a pulpit rabbi has been greatly influenced by it and he strives to share the different concepts in order to achieve a close connection with the Divine. His work reaches way beyond the synagogue walls: he goes to offices or people's homes teaching "Lunch & Learn" and various learning sessions. Under his leadership, the synagogue has acquired the reputation of "the most welcoming Shul", offering a multitude of programming and services.

Passionate about Israel, he is also enthusiastic about outreach to the unaffiliated and to the Young Professionals. He and his wife Valerie host large monthly Shabbat dinners at their home and in a wide variety of venues throughout Miami. He is known for his exciting holiday cocktail events where Jews of all different backgrounds can mingle. 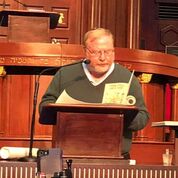 RABBI Harvey Hoffman, our Ba'al Korei, officiated for eight-and-a-half years as the pulpit Rabbi of Century Pines Jewish Center, located in Century Village of Pembroke Pines, Florida prior to assuming the position of Torah reader of Temple Emanuel of Miami Beach.  Before Century Pines, he spent ten years leading services as Spiritual leader in Whitestone Hebrew Center, of Queens and in North Baldwin Jewish Center in Nassau County, NY. Earliest in his synagogue career, before getting his rabbinic ordination, he served for five years as Cantor of Congregation Ahavat Shalom of Lakewood, New Jersey. Rabbi Hoffman lives in Century Village of Pembroke Pines, where he has lived for the past nine years.